The Sense of Reality in Hallucinogenic Experiences: A Comparative Study of Serotoninergic and Anti-Cholinergic Plants
Martin Fortier, Ph.D. Candidate
Friday April 21, 2017 • 11:00 AM - 11:30 AM • Skyline Room 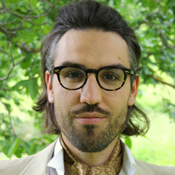 The sense of reality (SR) refers to how real things are experienced to be; the SR must thus be distinguished from judgments of reality. Now, a fascinating question is that of knowing what the SR of hallucinogenic experiences (HEs) is: do these experiences feel as real as ordinary reality, or more real, or less so? Some preliminary proposals have attempted to answer this question (e.g., Shanon, 2002; Beyer, 2009). I will argue, however, that none of them is entirely satisfactory. Understanding the nature of the SR in HEs requires to build a general and comparative theory of the SR. This can be done by paying close attention to various cases where the SR is altered: derealization disorder, psychosis, virtual reality, lucid dreaming, etc. Such a comparative framework shows that the SR is a heterogeneous – rather than a unified – kind. I will first present evidence in favor of the heterogeneous view of the SR. Next, I will explain how this heterogeneous account can shed new light on the nature of HEs. Especially, it will be shown that the SR of “serotoninergic hallucinogens” (e.g., ayahuasca or psilocybin mushrooms) is very different from that of “anti-cholinergic hallucinogens” (e.g., toé or mandrake). These differences will be cashed out in both phenomenological and neurobiological terms. The upshot of the talk will be that the SR of HEs cannot be boiled down to any simplistic characterization. For instance, characterizing HEs as simply being “more real than real” remains rather vague and inaccurate. I will contend that we can better do justice to the complexity of these plants by acknowledging the heterogeneity and the ambivalence of the experiences they induce.

Martin Fortier, Ph.D. Candidate, is currently a doctoral student at Institut Jean Nicod (a lab hosted by the Department of Cognitive Studies of ENS-Paris) and at the Department of Philosophy and Social Sciences of EHESS-Paris. He is also a visiting student researcher at the Department of Anthropology of Stanford University. His research broadly explores how culture influences cognition. In order to investigate this question, Martin resorts to anthropology, neurobiology, philosophy and psychology. His current PhD research project consists in exploring the interplay between neurobiological processes and culture in hallucinogenic experiences. The model he is developing is largely influenced by the Bayesian framework. In parallel, Martin is exploring the topic of Amazonian animism. His main fieldwork is located in Shipibo communities of the Middle Ucayali, in the Peruvian Amazon.