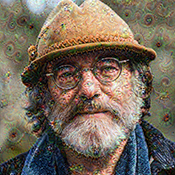 Psilocybin mushrooms have been used for millennia, and likely for millions of years. That psilocybin enhances neurotransmission has attracted the interest of pharmacologists, evolutionary biologists, ethnomycologists, artists, writers and more recently addiction and trauma specialists, and computer language coders. The interest in the benefits of psilocybin mushroom use, particularly, for microdosing, ushers in a new era for potential societal benefits across many scientific disciplines. Paul will examine the Stoned Ape Theory, recap some significant historical milestones, and describe some of the more significant psilocybin active species, discussing the future beneficial impacts of psilocybin use in our continuing evolution as a species.

Paul Stamets, D.Sc., is the author of 6 books, including Psilocybe Mushrooms and their Allies and Psilocybin Mushrooms of the World. He has discovered and named four new psilocybin mushrooms. He has received numerous awards, most notably as an Invention Ambassador (2014-2015) for the American Association for the Advancement of Science (AAAS), the National Award (2014) from the North American Mycological Association Award (NAMA) and Gordon & Tina Wasson Award (2015) from the Mycological Society of America (MSA). His influence has now flowed into popular sci-fi culture with his appointment as the senior science Starfleet officer, astromycologist Lt. Stamets (acted by Anthony Rapp), in the new Star Trek Discovery series.