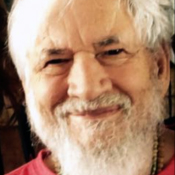 I will address the distinction between normative morality, characterized by prohibitions and duties, and virtue, characterized as a spontaneous goodness that arises from mental health and spiritual awareness, and draw attention to how psychedelics, in spite of being mostly repudiated by conventional and repressive morality, constitute catalysts for a healing transformation that can be regarded as the foundation for the Christian virtues of faith, hope and love.

Claudio Naranjo, M.D., was born in Valaparaiso, Chile in 1932 and began his professional life as a psychiatrist in Chile where he worked in the fields of Medical Anthropology and Personality. He also explored psychedelic therapy with various new substances. Then he became an early staff member of Esalen Institute, and later developed a synthesis of spiritual and therapeutic methods known as the SAT process, which includes the psychology of eneatypes, Buddhist meditation, spontaneous movement as a means of letting go, therapeutic theater, the re-elaboration of the childhood relations in the early family and other elements, which has been widely applied in many countries to personal development, therapeutic training, and to the education of teachers that may not only teach but assist human growth.

Once a Research Associate at the Berkeley UC Campus, he was a pioneer in the integration between therapy and meditation, and also in that of therapy and spirituality. As a disciple and successor of Fritz Perls, he has become a worldwide reference for gestalt therapy, and the University of Udine in Italy granted him an honorary doctorate in Education for his militancy for a transformation in education that would make it relevant to psycho-spiritual development and to the evolution of society. He was nominated two years ago for the Peace Nobel Prize and he is the author of 25 books.