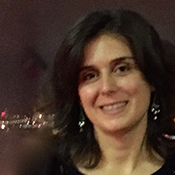 Posttraumatic stress disorders (PTSD), including depression, are disabling medical conditions affecting 1 out 6 people worldwide. Affected people tend to withdraw from normal life activities and, among a variety of other symptoms, show reduced social interactions when a trauma trigger recalls a previous traumatic memory. Yet, about half of affected people do not respond to current medications, highlighting that there is an urgent need for novel treatments. Importantly, a same traumatic event may be more or less stressful or have pathophysiological consequences for one individual compared with another. Recently, we introduced a rapid screening method for identifying at-risk individuals among an inbred population of mice. We showed that at- risk individuals (At-risk) have baseline increased levels of the mineralocorticoid receptors (MR) in hippocampus and, after stress, display increased levels of anxiety- and depressive-like behaviors along with reduced levels of the presynaptic inhibitor of glutamate release, mGlu2 receptors, as compared to resilient individuals (Res) with a inherent ability to cope with stress. More recently, we found that these same at-risk mice show social withdrawal after stress along with retraction of dendrites in the stellate neurons of the medial amygdala (MeA). Treatment with a rapidly-acting antidepressant, acetyl-L-carnitine (LAC), remediate retraction of MeA dendrites and ameliorate dysfunctional social behavior. Here, using the same screening method, we tested whether individual differences in hippocampal MR expression could predict and promote development of PTSD-like phenotype using a novel witness conditioning stress mouse model. After identifying At-risk and Res individuals with the recently developed light-dark (LD) screening method, all experimental groups (At-risk-Unwitnessed, Res-Unwitnessed, At-risk-witnessed, Res-witnessed) were tested for behavioral and molecular responses 10 days after a conditioned stress episode. We find that At-risk-witnessed mice showed significant differences in unconditioned and sound-conditioned responses over sociability tests as compared to Res-witnessed mice and unwitnessed groups. The epigenetic, molecular and structural variables underlying such different behavioral responses are under investigation as is the ability of ±3,4-methylenedioxymethamphetamine (MDMA, ecstasy) to ameliorate behavioral impairments. We are using RNAseq for relevant brain regions, including the MeA, to uncover the whole transcriptome that leads to the individual differences in response to stress and pharmacological treatments. In an effort to understand preventive therapeutic strategies, we further proceeded in characterizing the molecular profiles of At-risk individuals prone to developing a PTSD-like phenotype and Res individuals. Interestingly, we find that At-risk individuals also have inherent inflammation tone (high IL-6 levels) and inherently reduced levels of the endogenous metabolite, LAC, suggesting a convergence of features of sensitivity to stress. This can be relevant to preventive care strategies, such as a combination therapy with low doses of LAC and MDMA that is currently under investigation. Finally, the results above show that a traumatic stressful experience superimposed on top of inherent individual differences can lead at-risk individuals to develop PTSD and resilient individuals to adaptability to the same stressor. These findings may offer the opportunity to develop prophylactic therapeutic strategies, pharmacological or behavioral, to prevent the deleterious effects of stress in at-risk individuals.

This work is supported by the David Rockefeller Research Grant

Carla Nasca, Ph.D., is a PostDoctoral Fellow of the American Foundation for Suicide Prevention in Bruce McEwen laboratory of Neuroendocrinology at the Rockefeller University, New York. Before moving to the Rockefeller University, her Ph.D. work revealed acetyl-L-carnitine (LAC), a metabolite and also a nutritional supplement, as a novel rapidly acting antidepressant candidate with epigenetic properties. Her studies investigate the inherent individual susceptibility to mood disorders and the underlying epigenetic and biological factors along with exploring the effects of pharmacological and non- pharmacological means in adulthood and aging. Her collaborative translational work aims to corroborate biological causes and predictors of the course of PTSD and depression.