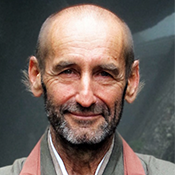 The rise of Buddhism and Yoga and general interest in Spirituality in the West is closely interrelated with the rise of Psychedelics or Entheogens. The speaker is a typical example of a whole generation that experienced and enacted this mutual co-arising. We will look at some of the historical facts and share what we have been doing in Switzerland over the last few years…. and muse / dream of what might be possible in the near future. Bring your questions and your visions, together w'll negotiate the way.

Vanja Palmers was priest ordained and received 10 yrs. of formal Zen training at the Zen Center of San Francisco, mostly at Tassajara and Green Gulch. He received Dharma Transmission from Kobun Chino Otogawa Roshi and is the co-founder and head of the meditation centers Felsentor (felsentor.ch) in Switzerland and Puregg (puregg.org) in Austria. After the initial inspiration and then three decades of psychedelic abstinence, he is now interested in the possible combination of these two disciplines…. meditation and entheogens and has, together with the University of Zürich, organized retreats / studies along those lines.